As part of a new series of articles here on RWP, let us introduce “Race Oddity” – a look at some of the more unusual racing cars produced throughout history. 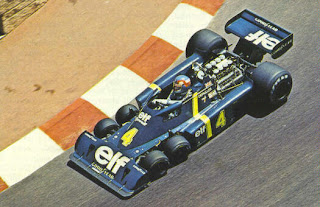 Of course one of the oddest and perhaps one of the more famous racecars ever made was the Tyrrell P34. Ken Tyrrell’s team started racing in Formula One during the 1968 season with French built Matras to a fair degree of success. The politics of Tyrrell’s French Elf sponsorship combined with Matra’s desire to use their own V12 engine as opposed to the superior Ford-Cosworth DFV V8 led the team to begin development of their own cars in the early 1970s. The first official Tyrrell-made car was released in 1970 and won both driver and constructor titles in 1971. Throughout the 1970s, the team was a significant contender in the F1 arena. For 1976, Tyrrell’s designer Derek Gardner – who previously worked for Matra – came up with the gasp-inducing P34 six-wheeled car. 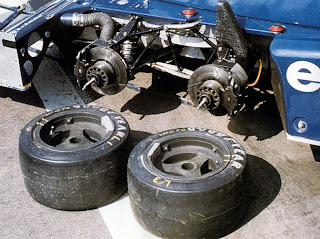 The car used two sets of tiny 10-inch front wheels which both steered, and the Cosworth 3.0 litre DFV powered the rear through a Hewland gearbox. The reasoning for the layout was as follows: with smaller (and lower) front wheels, the frontal area of the car could be reduced and airflow over the top of the wheels could be improved. However, a reduction in wheel size also resulted in a reduction of front-end grip. The solution was therefore to simply add another set of wheels, which effectively doubled the contact area of the steering tires. Adding somewhat to the odd-ness of it, were small windows cut into the bodywork on some iterations of the chassis near the steering wheel to aid driver vision. The cars first ran in competition during the 1976 Spanish Grand Prix, where unfortunately both of the Tyrrells failed to finish, but were fairly competitive throughout the season nevertheless. Tyrrell P34s pulled off a 1-2 finish in the 1976 Swedish Grand Prix with drivers Jody Scheckter and Patrick Depallier. The drivers differed on their opinions of the car: Depallier was happy with it, but Scheckter was not impressed at all and was replaced by Ronnie Peterson the following season. 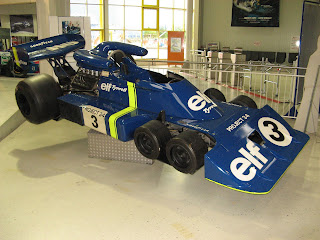 While interesting on paper, the additional two wheels at the front also meant more suspension parts and the front of the car, and therefore, more weight. This became problematic for handling. More problems arose for the car when the specially made Goodyear tired proved to be lacking against their normal sized counterparts from both Goodyear and other manufacturers. As Tyrrell was not the tire company’s main concern, development lacked and proved to be detrimental to the P34’s performance. The aerodynamics were improved a bit for 1977, but it was of little avail. The ’76 win in Sweden would be the Tyrrell’s only victory with the six-wheeler, and the P34 was retired for 1978.