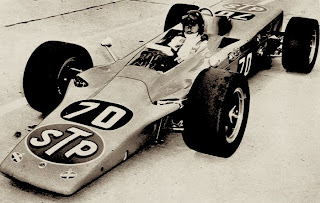 Turbine powered automobiles have been tried and tested many times as a replacement to the conventional piston engine. Essentially a jet-engine mated to a mechanical drive shaft, turbines allow a vast power curve and relative simplicity. The idea became gained popularity in the late 1950's "Jet Age" and was experimented with heavily by Chrysler in particular. They proved rather impractical on street cars though for various reasons like extreme heat, noise, and high fuel consumption. Even Rover took the technology to LeMans in 1963 with Graham Hill and Richie Ginther, but that of course is another story.

Andy Granatelli's STP-Paxton turbine-powered special came close to winning the 1967 "500" at the hands of Parnelli Jones before dropping out 10 laps from the finish due to a bearing failure in it's unique 1-speed drivetrain. The turbine's wide operating speed range meant changing ratios was unnecessary, but power was sent to the ground with a bespoke Ferguson (as in Massy-Ferguson tractors) four-wheel-drive system. Though it didn't win, Granatelli was sold on the potential of the formula. 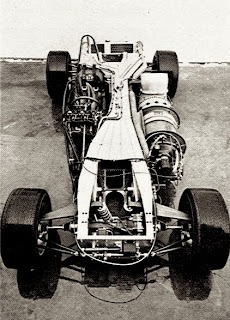 (The STP-Paxton chassis and engine)

The next year, Lotus joined STP's efforts with their vast racing expertise and built on Granatelli's idea. This project became known as the Lotus 56. As if the 500+ horsepower Pratt & Whitney turbine (designed for helicopters) wasn't radical or innovative enough, designer Maurice Philippe clothed the car in an unusual new aerodynamic "wedge" shape. Unlike the 56's predecessor, which placed the driver beside the engine, the Lotus had its turbine was mounted in the center behind the driver, which allowed for a completely symmetrical and balanced chassis. Perhaps even early in development, Lotus had plans for the four-wheel-drive car on tracks that were not just ovals. In any case, it seemed like a very promising package and STP's Granatelli was eager for his team to have a victory at Indy. 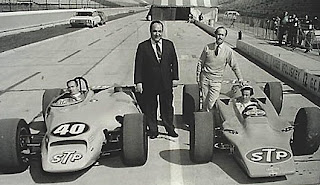 (Granatelli and his 1967 effort with Chapman, Clark, and the Lotus)
Initially, Chapman intended to have his best F1 drivers and Indy veterans drive the new machine - Jim Clark and turbine veteran Graham Hill. Tragically, Clark was killed early in 1968 in a Formula 2 crash before the Indianapolis event. Chapman then asked Mike Spence to step in, though he too died at the wheel. During practice for the "500" he struck the wall in one of the 56s and was hit in the head with the right front tire. Former motorcycle racer Joe Leonard replaced him and went on to capture the pole, his teammate Hill qualified in second, and relative newcomer Art Pollard took 11th in a third car.

(Spence's fatal crash in the Lotus 56)
When race day came, Hill's car was the first to bow out, losing a wheel at lap 110 and crashing into Turn 2. Leonard was passed after 31 laps of the race, however, he regained 1st after leader Bobby Unser had problems with his car's transmission. At a re-start after the final caution flag, both Lotus 56s suffered from snapped fuel pump shafts and were forced out of the running. Victory once again eluded the STP turbine-car effort in spite of so much promise. To make matters worse, USAC (Indy's governing organization at the time) banned turbine-power as well as four-wheel-drive. 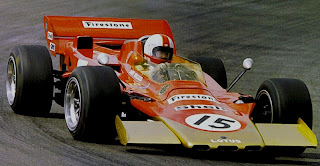 (David Walker in 1971 at the wheel of a 56B - note addition of wings)
Back overseas, Chapman was still trying to get his money's worth. A modified version of the 56 (the 56B) was casually tried in Formula One during the 1971 season. The "B" would only compete in three F1 races where it proved heavy, unreliable, and overly complex. The car looked like a contender in the Dutch Grand Prix where wet-weather allowed the FWD system to come into its own, however driver Dave Walker went off-track and didn't finish. At Silverstone suspension failure put the car out, and finally Emerson Fittipaldi could only manage 8th at the Italian Grand Prix. 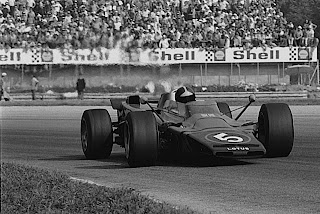 (Fittipaldi in Italy with later livery - front wings removed for this high-speed track)
The 56's career was finally over. Lotus had already carried-over the "wedge" design to the very successful 72 F1 car, but turbines whirred away into the history books. 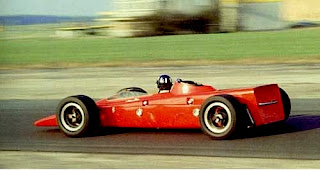 Posted by Ian Rothwell at 11:25 PM No comments: