In spite of a weather forecast of sunny and 70 degrees, Watkins Glen International was cold and rainy on Tuesday morning when a surprisingly large number of fans began turning up at the track for the Mobil 1 sponsored "Seat Swap" event. Formula 1 driver Lewis Hamilton and Nascar driver Tony Stewart were set to trade cars for a few laps around the historic circuit in New York. The Glen made a name for itself by hosting the United States Grand Prix (among other international racing events) for roughly two decades. In more recent years, Nascar has utilized the track for one of a couple road courses run throughout the season. Tony Stewart, therefore, is no stranger to Watkins Glen in a Nascar, though it's been nearly 30 years since a modern Formula 1 machine has raced around the circuit. 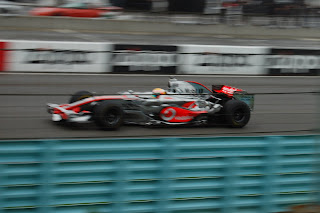 The relatively quiet atmosphere was awakened as Hamilton's McLaren MP4-23 (2008) was fired up in a tent across from the grandstands on the front straight. Perhaps it's the newer, smaller 2.4 L engines, or the fact that the Glen is fairly open in terms of surrounding structures, but I couldn't help but think that the McLaren didn't seem nearly as loud as the old V10 F1 cars I recall from Indianapolis in 2000 and 2001. After a few minutes of warm-up revs, the McLaren was switched off, and there was more waiting. This would be the case throughout most of the day. The F1 was turned on, revved, and switched off several times before it was finally wheeled out to the track along with Stewart's Chevrolet Impala Nascar.
In the mean time, F1 driver David Coulthard was keeping busy by taking VIPs around the wet track in a Corvette. Since Nascars don't race in wet conditions and Stewart himself is not experienced in the rain, let alone in a Formula 1 car, there was a bit of worry that the event may be called off. Interestingly, the Nascar was fitted with rain tires, a windshield wiper, and even a defogger. After a few hours the rain let up, and the two cars were finally rolled out to the start/finish line. 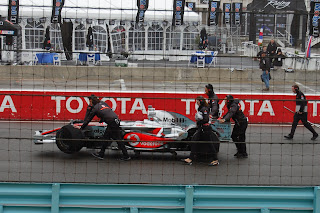 The scene of watching the respective team members prepare their cars was rather telling of just how different the machines are. The Nascar was simply pushed out on its own wheels whereas the F1 car was wheeled out on a dolly with tire warmers kept on until the very last moment. Most of the activity seemed to me centered around preparing the McLaren - the Nascar waiting patiently. It was like imagining a country boy going out on a date with a European super model. 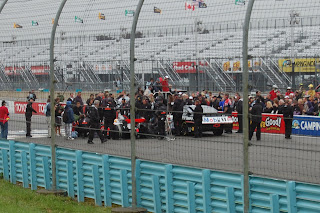 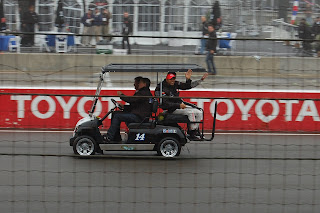 The two drivers eventually got into their own cars and went around for a parade lap. Stewart came in to the pits while Hamilton went stayed on track for a few warm-up laps. The sound of the car could be heard the entire time as it went around the 3.4 mile circuit. Hamilton had never been to Watkins Glen before but seemed to have no trouble at all. Seeing the F1 car at Watkins Glen just seemed to fit. I'm certain that many of the people there were thinking that it's a shame the series no longer races at the rightful home of Grand Prix racing in the United States.
Stewart went out in his car, but was notably conservative. The track was still quite damp, however, and it has to be one of the only times a Nascar has been driven at speed in such conditions. Stewart came back in and it was Hamilton's turn in the Impala. The track had started to dry significantly at this point, but Lewis seemed all the more fearless with the car - even sliding it sideways before coming back to the front straight on his final lap and doing an incredible series of doughnuts in front of pit lane.
Hamilton remarked at how well planted the Nascar seemed and how much he enjoyed the Watkins Glen circuit. (Maybe Bernie Ecclestone heard him?) 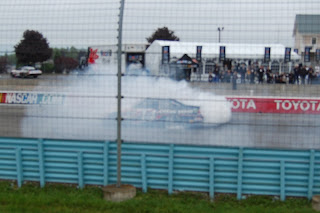 Stewart got into the McLaren and after a stall, was out on track. He seemed very timid with the car the first time around, though one can't blame him. The next couple times around, he seemed to gain a lot of confidence. The only noticeable difference in driving styles from this observer's point of view, being the much more relaxed downshifts going into the 90' after the front straight. 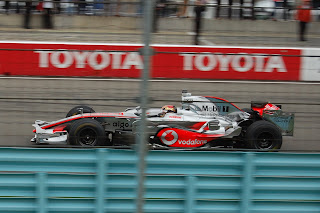 In the end, and to be perfectly honest, Hamilton was the faster of the two in both machines. That being said, Stewart couldn't be blamed.
The event could have been more spectator friendly and a little better organized, but hopefully the several thousand people who showed up on a weekday in terrible weather will get the point across that we want to see Formula 1 cars in the US - and at The Glen. 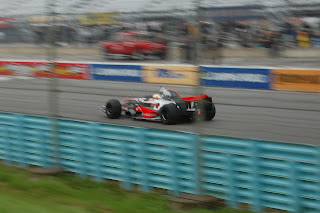 Posted by Ian Rothwell at 1:39 PM No comments: